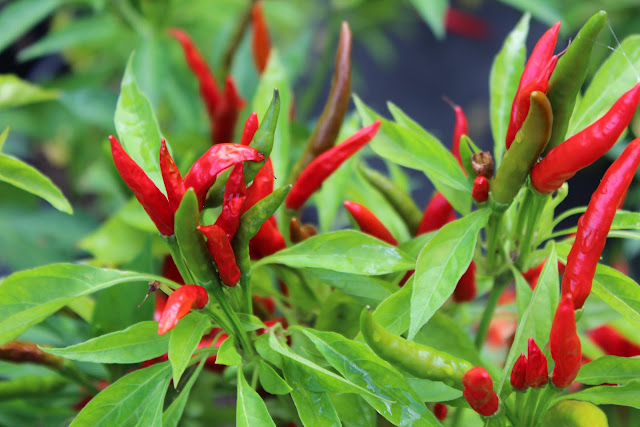 Last year I saved seed from what I thought was the perfect chilli. By that I mean one which has the right amount of heat for my taste and one which can be used either whole and green in say a vegetable curry or chopped and red in sauces and marinades.
The bonus with this one is it dries well even on the bush and produces enough for year round use.
Don't know what variety or origin this one is but would be interested to know.
Posted by Florez Nursery at 6:41 PM 1 comment: 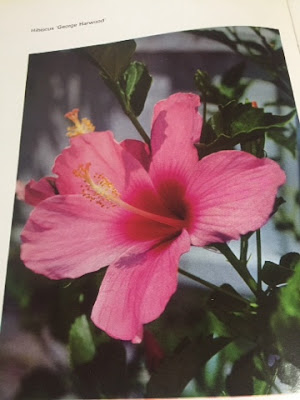 Hibiscus rosa-sinensis 'George Harwood'
photo by Arthur Gulliver (Your Garden magazine)
This full page colour photo of 'George Harwood' appeared in the second edition of the book Garden Trees and Shrubs in Australia  by Harold Sargeant (Macmillan of Australia 1968)
The first edition of this book was published in 1951 with the title including Asia as in Australasia. ( Colorgravure Publications )
Described as 'a new pink variety' for Melbourne gardens, it had made its way south from Sydney where it made its first appearance way back in 1902 having been bred by the George Harwood who at the time was a propagator, overseer and superintendent at the Royal Botanic Gardens. His tenure there was from 1883 to 1914.
Of note is the watercolour painting of it now in the Mitchell Library (State Library of NSW) by Essex born Margaret Flockton who would go on to be described as 'the most accomplished botanical artist in NSW'. Her legacy is ongoing and today she inspires a new generation to pursue botanical illustration. 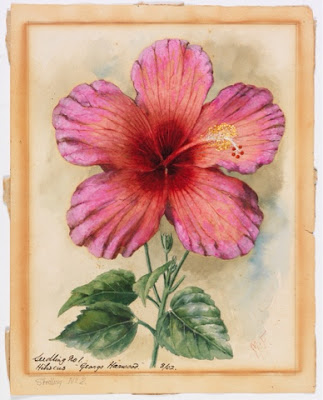 So where can this Hibiscus be found today?
While not available commercially it is probably still around in an old garden as Hibiscus are great survivors always flowering despite years of drought and neglect.
Recently I thought I might have found it in a 1960's/1970's planted garden growing just a metre away from a huge peppermint gumtree which was probably planted at the same time. 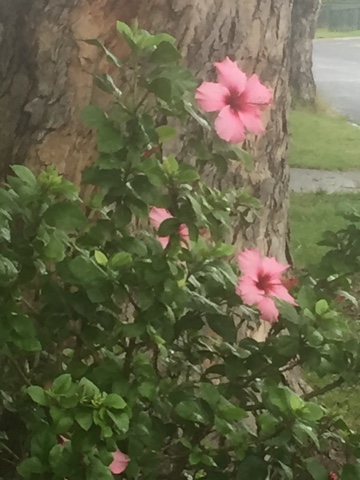 Hibiscus rosa-sinensis 'George Harwood' ??
I will leave the question marks in place until someone can confirm my naming. 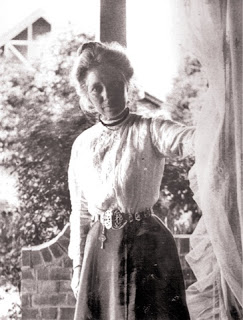 Email ThisBlogThis!Share to TwitterShare to FacebookShare to Pinterest
Labels: Hibiscus 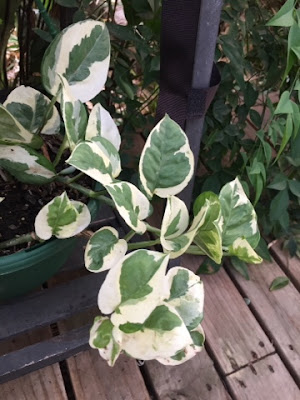 'Devil's Ivy' Frosty
Epipremnum aureum 'Frosty'
I have been growing this white variegated form of Devil's Ivy for several years now and find it more appealing than the yellow/gold form which has much larger leaves. I have several plants of it growing in different positions both indoors and out and at this time of year it is looking at its best, responding well to warm humid days.
The leaves are somewhat stiff in appearance and when unblemished it could be said the whole plants looks plastic or artificial. Perfect! Of course it does not stay that way for long and during winter many leaves develop burnt edges or drop off as a response to cold.
This is when the plant needs a rest, given minimal water and kept in a warm sheltered location, preferably out of sight as the temptation to bin a tired looking plant may overtake you. 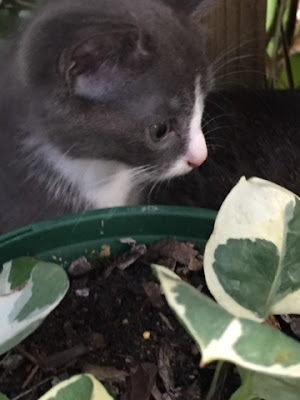 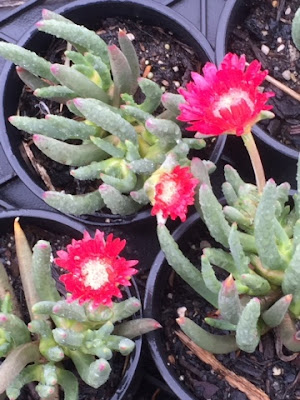 Cephalophyllum sp
This small South African "pigface" family succulent came to me with a wrong name and after a bit of searching I came across a good match as to what it might be.
I used 'The Timber Press Guide to Succulent Plants of the World' by Fred Dortort as reference.
Pinning it down to a species is proving more difficult and at the moment it is a toss up between alstonii, stayneri or framesii.
There are about 30 species in the Genus and they display a wide range of jewel like flower colours. Growth occurs mainly in winter, no doubt as a response to rainfall.
The parent plant has spread to about 30 cm across and is quite decorative even when not if flower as the leaves resemble small grey green birthday candles with bright pink tips.
These flowers came out during the last few days and I like the way they stand above the leaves on short stems.
Posted by Florez Nursery at 10:42 AM No comments: 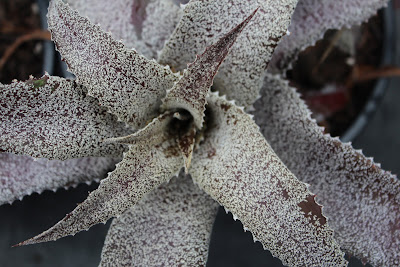 Orthophytum gurkenii
I have been growing this unusual Bromeliad for a number of years and it seems never to be without one or two flower stems. The 40cm tall arching inflorescence is a striking chartreuse green in colour which contrasts well with the bronze powder coated foliage.
New plantlets appear at the end of these green bracts which have the unfortunate attribute of being edged with razor sharp spines and as they mature these spines can detach and lodge in the fingertips if you handle them without protection.
It is one of those easy care plants however preferring a dry location in sun or semi shade.
Apparently there are quite a number of different forms of this plant including ones with striped leaves. 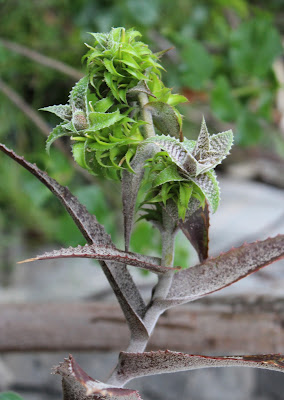 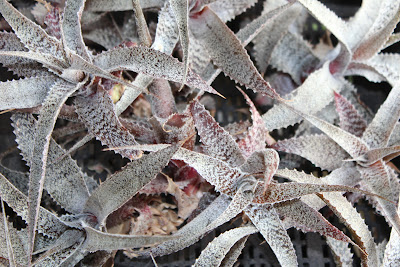 From a couple of flower stems I cut more than a dozen new plants though they probably would have been quite happy staying attached to the mother stem for many months to come. 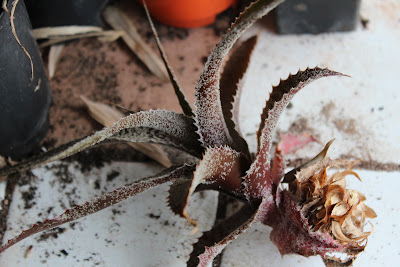 And now comes the tricky part. Underneath these dried razor sharp bracts at the base of the plant tiny nobbly roots are forming and need to be exposed to give them a good start in life. With gloved hand I hold the top and peel away using small flower snips all the while taking in a lung-full of white fluff being shed form the leaves.
I will plant them into small pots using an open bark/Perlite mix and by the end of the year they should be ready for a new home.

Posted by Florez Nursery at 10:07 PM No comments:

Email ThisBlogThis!Share to TwitterShare to FacebookShare to Pinterest
Labels: Bromeliads 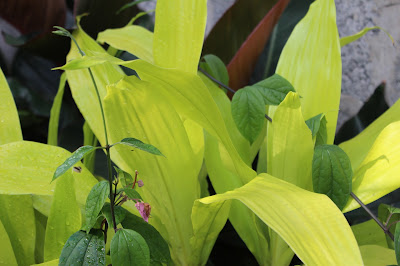 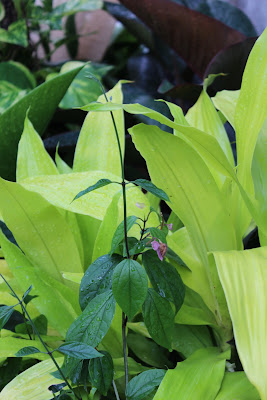 The multi-branched garden planted specimen of this plant is now about three metres tall and growing under house eaves in a shady spot. It does not look half as good as the potted specimens I have pictured here which are in a greenhouse and sheltered from the elements.
A few years back a large branch of the garden one toppled over in a storm so I cut it up into 30 cm lengths so I could propagate some new plants.
Stems cuttings from a mature plant take root quite easily though they require a free draining mix with lots of Perlite as part of the propagation mix. After a couple of years they have now grown to about 120cm in a 200 mm pot and I can almost say they thrive on neglect as they don't seem to mind a low water and fertilizer regime.
I placed one of these indoors several months ago and though it has lost its very bright yellow leaves it still has attractive shiny pale green foliage.
With a bare trunk it has an elegant palm tree like appearance in a red ceramic container.
Outdoors the leaves rarely stay unblemished by strong winds or insects.
I am reminded of that other Dracaena (fragrans) which gets shredded by grasshoppers when grown outdoors in a warm climate. Many so called indoor plants just don't make the transition well when planted as garden specimens ,though some rejoice in their freedom and turn into monsters such as Ficus/'Rubber Plants'.

Posted by Florez Nursery at 3:38 PM No comments: 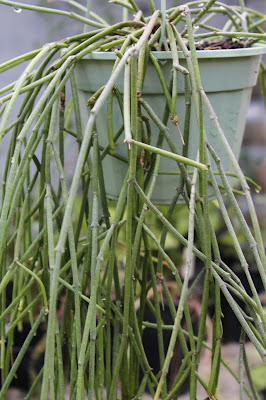 Simplicity itself is the appeal of a plant which goes through life as a mass of cascading stems while producing (allegedly) perfumed flowers. I have yet to see any flowers so I can't comment on that and it is always a little annoying when you read about a perfume with no description of the fragrance. Coconut? Vanilla? Honey? keep me guessing.
This is an easy care hanging basket or vertical garden plant and probably better in shade as mine has thrived under shade cloth. The hanging basket version is a bit lopsided as it was kept on a shelf for too long.

Florez Nursery
Wollongong, New South Wales, Australia
For more information on plants described here email Ian Percy at nurseryflorez@gmail.com or phone 0412-123-240 I write this blog to record the various plants I grow. Some are for interest as part of a collecting hobby and others are more commercial and these end being sold in the wholesale plant trade.